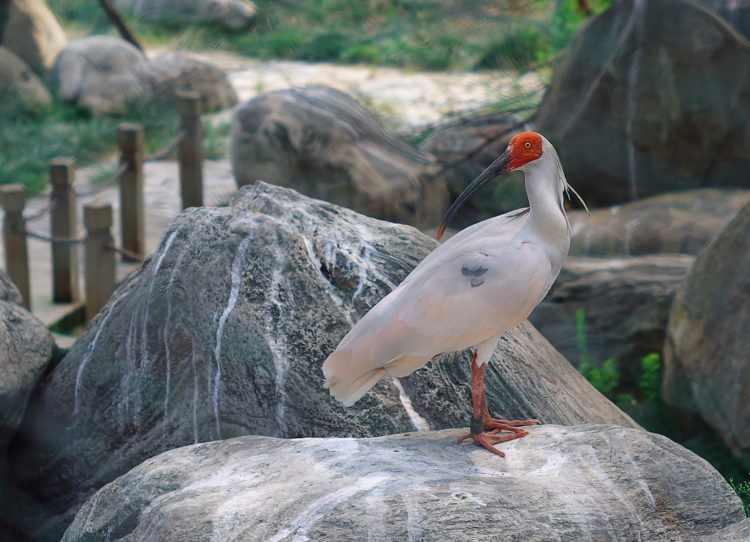 Feeding in flocks is hard work. And no one knows this more than ibises. Jostling ibis flocks in marshes are common, and fights often break out as birds try to get at food before their neighbours can.

Flock-feeding is not all about competition though – more eyes and ears make for a safer feeding experience. In a large flock, there is always someone vigilant to help prevent predators from being successful.

Also, if a predator attacks, a single bird’s chances of being the victim gets divided over all the flock members.

Ibis feed by feeling for crustaceans, fish, worms, and aquatic insects in soft soil with their sensitive beaks. What benefits might such tactile, or touchy-feely, foragers accrue by feeding together with birds that use more visual cues to catch prey, like egrets do?

This is the question a team of scientists asked with regard to the endangered Crested Ibis in China in their .

The scientists discovered there was an awful lot of complexity at play when Crested Ibis fed in a flock – either in a single-species flock with only other Crested Ibis, or in mixed-species flocks with egrets.

Contrary to what one might expect, in the much larger mixed-species flocks, vigilance did not vary with flock size. These observations indicate that ibis seemed more comfortable with vigilance cues of their own species.

Significantly, ibis were less vigilant when in single-species flocks (17% of their time, on average) than when feeding in mixed-species flocks (20% of their time). These figures are much higher than those observed for visual foragers. It may well be that ibis feeding styles, which require them to have their head down digging for food, necessitates more time being alert after each feeding bout.

AD decreased as flock size increased in both single- and mixed-flocks – a clear indication that more was better to determine when a risk was high enough to stop feeding. AD, however, was much higher in mixed-species flocks – an indication that ibis likely do poorly at recognizing cues that egrets use to communicate with each other.

Similarly, FID decreased as single-species flock sizes of ibis increased. Crested Ibis were clearly feeling much safer with more of their own. FID did not change as flocks of mixed-species increased. This was evidence that ibises placed more importance on the reactions of their own kind. Alternatively, they were more alert to early warnings in mixed-flocks.

The scientists also noticed that egrets sometimes stole food from ibises. However, this behaviour did not appear to be frequent enough for Crested Ibis to increase vigilance or FD or FID when the species fed together.

The scientists suggest “Crested Ibises benefit from joining mixed-species flocks with Little Egrets by using collective detection and early warning and may tolerate some intraspecific competition”.

The scientists also suggest that one of the important implications of this study is that “developing habitat conditions that favour mixed-species flocks may reduce the perception of risk by ibises due to the early warning effects of egrets, particularly in habitats with high levels of predation and/or disturbance”.

Probing the mud, occasionally striking neighbours that got too close, and feeding among egrets are completely natural behaviours to ibis. It takes careful thinking and planning to observe these behaviours closely to make much more sense of them.

When such observations can also potentially improve conditions for endangered ibis species that is a call for a firm pat on the back of the observers!