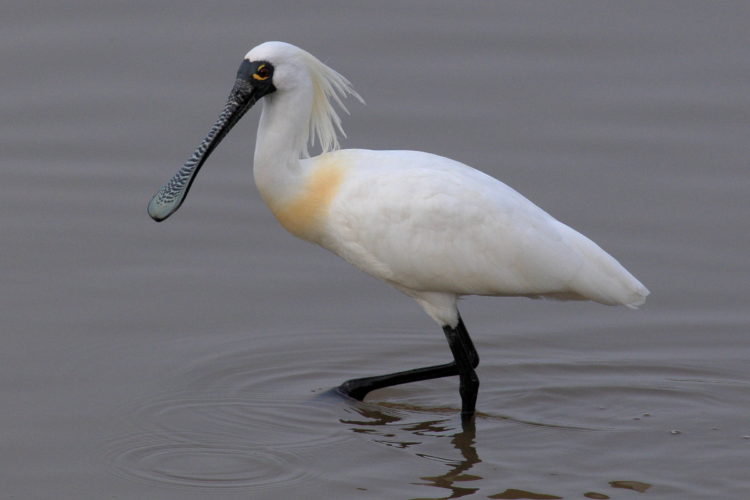 The only endangered species of spoonbills is the Black-faced Spoonbill, and this species also has the most restricted distribution range of any spoonbill species.

In the 1950s the population of this species was reduced to 300 in the wild. A large number of wild eggs were harvested immediately after the Korean war, which was likely the prominent cause of the species’ decline.

Current threats to the species include habitat loss, increased industrialization, and fishing.

In a new paper published in the journal Bird Conservation International, scientists have evaluated 18 years of survey information before providing a very happy conclusion: the population of the Black-faced Spoonbill has increased 8%! SIS-SG member Yat-Tung Yu is part of the

team that carried out this impressive analyses using synchronized counts at 42 wintering sites.

The most useful components of the paper are the identification of 12 important sites, and a detailed discussion by the authors who provide a nuanced view of potential threats, and their thoughts as to why the Black-faced Spoonbill was not declining in slightly-disturbed sites.

Authors suggest “protection of natural and intact habitats and appropriate management of artificial habitats, including minimising human disturbance and provision of suitable feeding environment, are both crucial to accommodate the increasing global population”.

There is a lot of work to be done yet to understand how these birds respond to perturbations – both natural and man-made. There is also a lot of work required on the basic biology of the birds, including movements, feeding requirements in sites with different levels of human disturbance, and the impact of pollutants.

We hope that the scientists and conservationists can undertake all of the required work. For now, we join them to celebrate the community spirit that made it possible to bring together such an important data set, and also cheer the increase in the population of this endangered spoonbill species!