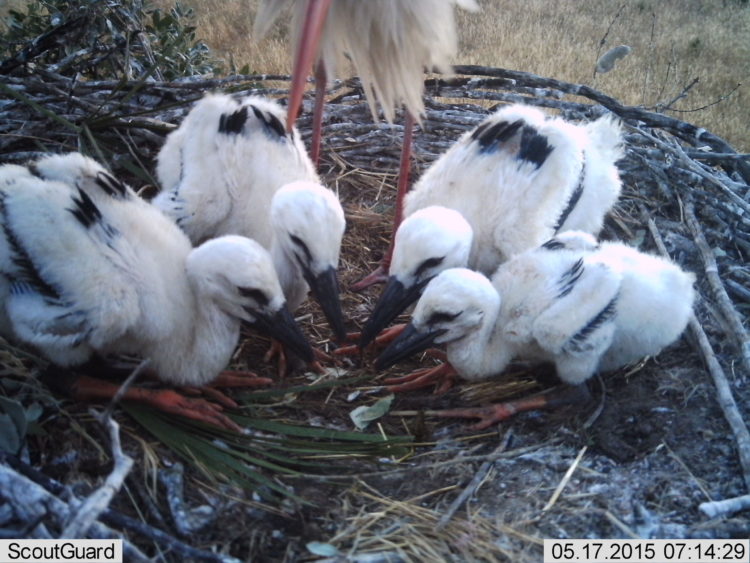 In birds, behaviours of nestlings and provisioning adult birds are greatly varied. In most species, jostling by senior nestlings to reduce food access of younger nestlings is common.

In birds like storks where chicks are altricial, or featherless and blind at hatching, competition for food among nestlings is a common feature. The bigger and more active nestlings usually garner most of the food.

The singular, remarkable aspect of storks for most people are the noisy colonies where many hundreds, even thousands, of birds assemble to nest atop tree canopies. At first sight, it is astonishing that no one is falling out of the nests, and all of the noise suggests intense fighting.

White Stork adults are also infamous for filial infanticide – the killing of chicks by adults at the nest. Why should this be so? One common theory is that stork nestlings lack aggression, and do not prevent each other from feeding when adults return with food. This in turn prevents reduction of the brood, which is a useful strategy to raise few healthy chicks especially in years and areas where food is not plentiful.

The lack of aggression, it is thought, is helped by adult behaviours of provisioning food: White Stork adults dump food into the middle of the nest giving all nestlings similar access.

This absence of nestling-based aggression that results in reduction of brood sizes – as is common in herons – it is thought, forces adults to carry out the thinning of the nest.

Evidence towards this hypothesis is sparse, and where present, is controversial. Some authors propose that nestlings compete with each other by trying to monopolize access to adults’ beaks. Other less-apparent aggression via stealing food, deliberate obstruction, or supplanting siblings is also possible, but is very poorly documented or understood.

In a new study of White Stork nestlings published in the Journal of Avian Biology, José María Romero and Tomás Redondo of the Estación Biológica de Doñana, Spain, provide new evidence towards this hypothesis.

They studied nestlings painstakingly over two breeding seasons in Andalusia, southern Spain, and conducted experiments with chicks of different ages and sizes, to address two primary questions: Do adult White Storks show active favouritism towards bigger chicks while provisioning food to nestlings? Also, do White Stork chicks show aggressive – obvious and less-obvious – behaviours to maximize food intake, and if they do, are senior chicks benefited more?

The findings of this study is stunning in its clarity. The settings in which colonies were studied – amid pasture, cropfields, in ponds and meadows – were no less stunning!

White Stork adults did not pick favourites. Additionally, chicks did not show aggression.

Arrival of adults to nests was met with chicks forming a neat circle, and adult birds regurgitated food into the middle of this circle after chicks had stopping moving around. Adult birds were seeking to feed the chicks equally!

Bigger chicks could, potentially, have monopolized feeding bouts due to access to beaks of adult birds. However, adult storks seemed to pay attention not to let their beaks get too close to young chicks, and actively prevented any advantage to larger chicks.

Food items that adult birds brought to the nest varied greatly in size and quantity. This, José María and Tomás feel, allows chicks of all sizes and ages to get fed.

The cream on the observational cake was delivered by the chicks – they offered no aggression towards each other, and did not attempt to obstruct or restrain each other whenever food was brought to the nest.

Food disputes were limited to times when a very large prey item was delivered. In such cases, chicks

would either have a “tug-of-war” (like with the eel in the photograph), or one chick would try to steal from another chick that was trying to swallow more than it could take.

Larger chicks would win these disputes most of the time, but surprisingly, both winners and losers ended up eating similar amounts of food.

This study is the first time anyone has tried to obtain careful observational data to check whether stork adults showed any favouritism, and to use experimental data to check if stork chicks are cordial with each other.

Brooding on why White Stork nestlings do not fight, the scientists suggest that the risk to nestlings in terms of energy and perhaps even falling out of the nest, is too high.

If they do fall out, chicks will not be able to climb back to the nest since most nesting trees are difficult to climb, and are very tall. Stork chicks are known to fall out of nests, but this is not very common across stork species.

A noisy stork colony, contrary to first impressions, seems to be more the epitome of fairness (adults) and bonhomie (chicks), rather than fighting that all of the hullabaloo would suggest. Who woulda thunk!