Recently an article has been published which documents the current status of the full array of northern bald ibis Geronticus eremita populations and projects, providing a benchmark against which we can assess progress towards a goal of having wild, self-sustaining northern bald ibis populations across their former range, from North Africa, through Europe, and into the Middle East. 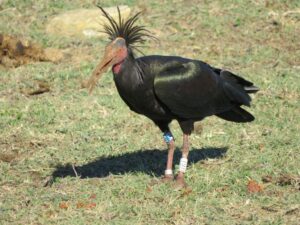 Despite being categorized as Endangered on the IUCN Red List, the northern bald ibis hangs on, mainly in a small coastal belt of Morocco, but may have disappeared in the wild from other countries where it has most recently declined: Turkey, Algeria, Ethiopia, Saudi Arabia, Syria and Yemen.

The reasons for these population decreases have most often been land-use changes and disturbance at colonies, along with significant direct persecution and pesticide poisoning. Luckily, there are also large and healthy captive populations in zoos around the world. These ex situ populations are supporting promising reintroduction projects that seek to return these birds to their former range in Europe. With such a long history of management and a range that encompasses so many countries, it is hard to gain an overview of what exactly is being done, how all these efforts combine, and what the future prospects are for the northern bald ibis.

For the first time, researchers from across the species’ range have pooled their collective knowledge to compile a comprehensive history and review of where things stand for the conservation of this amazing bird. This review was initiated at a meeting in August 2016 of the International Advisory Group for the Northern Bald Ibis, which took place in Seekirchen, Austria.

The northern bald ibis was once an important part of the wildlife in its former range countries: whether an iconic symbol and hieroglyphic in Ancient Egypt and a symbol of the arrival of spring in Turkey, or a sought-after quarry and indicator of ecosystem health. Its loss from some regions has meant the cultural memory regarding this bird has faded in several cases, and for many, it has become only a passing curiosity in a zoo. However, the restoration and recent local resurgence of the wild population in Morocco, where national protection efforts are paying off, have in 2018 resulted in downlisting of the species from Critically Endangered to Endangered on the IUCN Red List.

Furthermore, the establishment of a sedentary group in Spain, and migrating groups in Austria, Germany and Italy are helping with the development of translocation techniques for the species, although these populations seem unlikely to be fully self-sustaining in the immediate future, but we hope this will happen in future. They do, however, bring new profile and hope for the resurgence of this unique-looking species, as well as further impetus for the protection of relict northern bald ibis habitats in these countries and in other parts of the more recently contracted range.