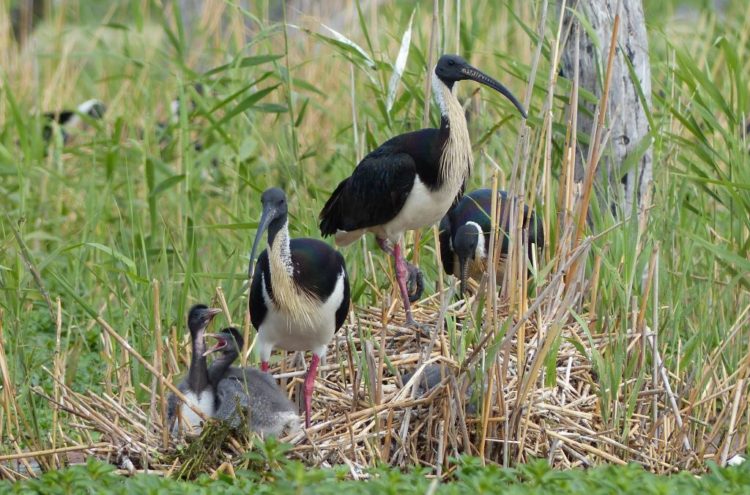 falcinellus), Royal Spoonbill (Platalea regia) and Yellow-billed Spoonbill (Platalea flavipes). All of these species are thought to be primarily nomadic, due to the extreme variability and unpredictability of Australia’s rainfall and river flow regimes – and all appear to be suffering population declines.

The use of valuable ‘environmental water’ within Australia’s Murray-Darling Basin has often been focused on supporting completion of ibis and spoonbill breeding events at key colonial nesting sites.  However managers and policy-makers are becoming increasingly conscious of the need to also manage feeding sites at Basin scales. Appropriately managing environmental water placement is critical to facilitating the recruitment of juvenile birds into waterbird populations. Yet we lack basic knowledge of how water flows interact with other factors such as predation, weather extremes and food abundance to influence recruitment in Australia. We also lack knowledge of the movements of adults and young during and between breeding events – where do they go, and why? Filling these knowledge gaps is key to improving the efficiency of environmental water management – applying water to the right places at the right times – and ensuring the success of future breeding events and waterbird recruitment.

The Waterbird Theme of the Murray-Darling Basin Environmental Water Knowledge and Research Project (MDB EWKR) has begun filling these knowledge gaps. By quantifying survival rates, movements, and their drivers using innovative modern technology such as remote nest cameras and GPS satellite tracking, it is assisting managers to identify key waterbird habitats and gain a better understanding of the scales at which habitats and environmental flows are required to support waterbird recruitment. The Theme is a collaboration between the CSIRO (Commonwealth Scientific and Industrial Research Organisation), University of NSW and University of Canberra, funded by the Australian Government’s Commonwealth Environmental Water Office.

Over the past 18 months, the MDB EWKR project has fitted GPS satellite transmitters to approximately 40 Straw-necked Ibis, 15 Royal Spoonbills, and 5 Australian White Ibis. The transmitters record hourly GPS location fixes between 7 AM and 7 PM, and a midnight fix, and are solar-charged and expected to transmit for at least two years.

While still in progress, preliminary results from this satellite tracking have already advanced our knowledge of previously poorly understood ibis and spoonbill movement and population patterns and trends in Australia.

Data analyses to be conducted as part of the broader project will explore and quantify these patterns and trends in more detail.  Recommendations for land and water managers will be developed from the results, particularly focusing on the spatial and temporal locations, characteristics and requirements of foraging habitats and birds that may influence environmental watering, vegetation management or pest management decisions.