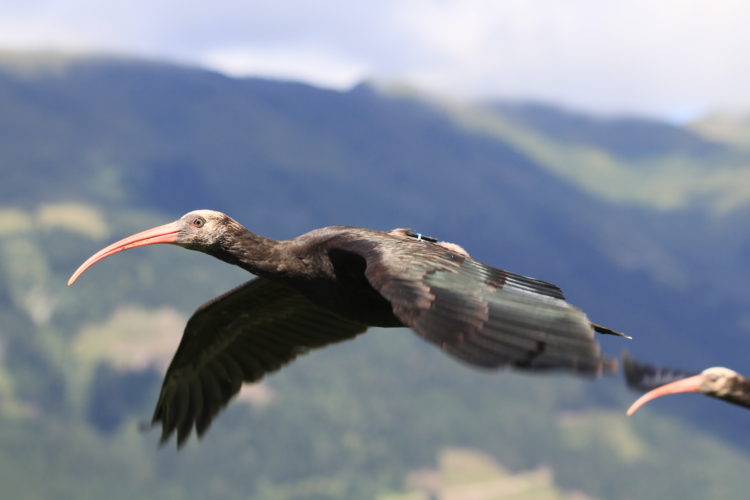 On August 19, 2016, the human-led migration started. At 10:30 am two microlight aircrafts and 25 birds departed from the training camp in Seekirchen am Wallersee, country of Salzburg. The route leads along the Mountainranges Tennengebirge and Dachstein to the south, then along the valley of the river Salzach westwards to Bramberg am Wildkogel, at the edge of the National Park Hohe Tauern. Tail wind supported the flight along the majority of the route, causing up to 78 km/h cruise speed at 42 km/h active airspeed. After 03:15 hour flight time and a total distance of 170 km the group landed at the planned destination.

Project manager Johannes Fritz said: “A fantastic start. All 25 birds followed reliable. They optimized their flight efficiency by the formation of a V-formation or by the use of thermals. These are excellent pre-conditions for the rest of the migration journey.” Only once along the route it came to a dramatic situation. Two golden eagles, probably a couple, flew repeated violent attacks against the birds. The birds responded very well by dodging in all directions. Pilot Walter Holzmüller: “After the initial shock, we turned things around and chased the eagles, whereupon they finally gave up and flew off.” Presumably, the attack was caused due to proximity to the eagles’ nest site.

Due to the weather conditions, the team had to make a three-day rest in Bramberg. However, on Tuesday, August 23, the journey will be continued along a completely new route. The demanding stage leads to the valley Zillertal, crossing the main Alpine ridge in approximately 2,500 m msl, then passing through the Dolomites to the region of Belluno in Italy. The total distance of about 230 km will be flown in one piece, with a stopover for refuelling. This stage is a big challenge, not only for the flight formation but also for the escort team, which consists of 15 people, with six vehicles and three trailers. Johannes Fritz: “We chose this route because our already reintroduced birds preferably cross the Alps in this region.”

Northern Bald Ibises are among the most endangered bird species on earth. As part of a conservation project, co-financed in the context of the European Union’s LIFE + project, eight partners aim reintroduce this ibis species, which was formally native to Europe. The largest challenge is to introduce a new migration tradition. That is the major goal of the ongoing human-led migration. This way the so-called founder individuals learn the flight path, which they then pass on as a tradition to their offspring. Meanwhile, because of the LIFE+ project nearly 100 Northern Bald Ibises are back in the European nature, living as migratory birds. It is the first attempt to reintroduce a continentally extinct migratory species.

During the human-led migration journey, data are collected to investigate the formation flight and the migratory behaviour of the birds. All birds carry data logger at their back, which records the GPS positon up to ten times per second. This will allow a detailed analysis of aviation technique and group dynamics. In addition, blood will be sampled in the context of two flight stages to investigate the physiological and hormonal regulation of migration flight. This scientific work takes place with Universities in Austria, Germany and Switzerland.