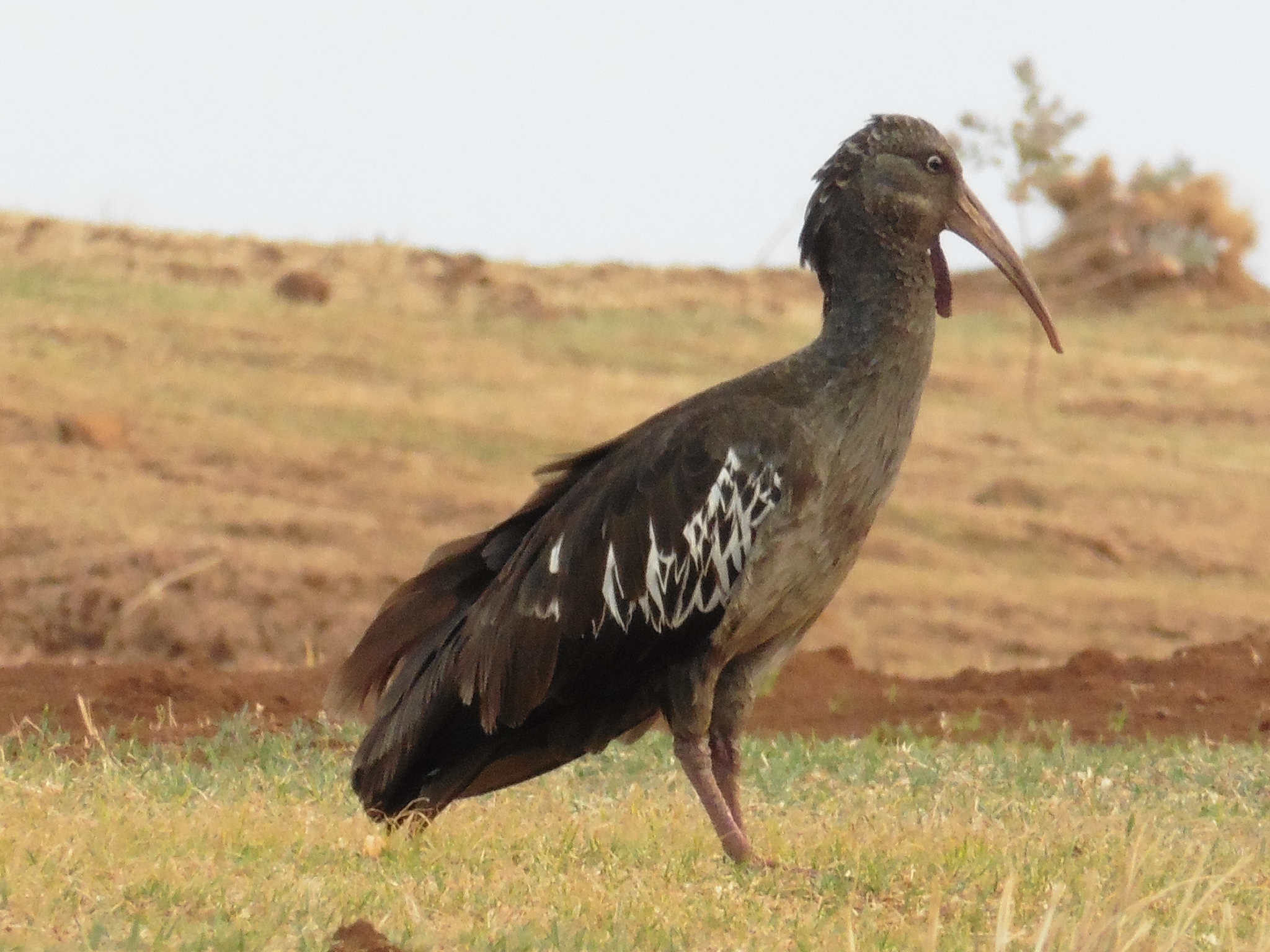 Breeding Range: Africa (AF)—entire continent rather than south of Sahara
Breeding Range Subregion: Restricted to highlands of Ethiopia and Eritrea

Description. A large brownish-dark ibis (average length is 60 cm), with a variable white wing-patch (formed by mainly white or white-edged wing-coverts) in adults and juveniles (Cano, obs. pers.). No other dark ibis has white wing path. The rest of the plumage is glossed dull green, with dull red bill and legs, and pale eye. The male and female wattle ibis are same in appearance; show a red small and thin wattle hanged from throat/base of the bill and the crown has a no always visible crest extending onto neck. Immature is duller, not wattle, with grayish legs, and more white-spotted neck (Cano obs. per.). In flying, the white patch is clearly visible on the upper surface of the ibis’ wing.

Voice. Its voice is easily recognized even from some distance away because of its loud, raucous rattles and gurgles while the individuals are either flying or perched. It is heron-like voice, quite different from other ibises. This voice becomes familiar among the wildlife’s sounds along its range.

Biology. Breeding. The Wattled Ibis nests in the little rains in March – April (“Belg” season), in the big rains in July (“Meher” season) and occasionally in the dry season in December (del Hoyo et al. 1992).  They typically nest in small to large colonies that are usually found at altitudes between 1,800 – 3,000 m (~5,900 – 9,840 feet). Occasionally the Wattled Ibis is nests singly or in two or three. In that case it is more likely to be placed on the tops of trees or on ledges of buildings at lower elevations (Brown et al. 1982, del Hoyo et al. 1992). There are observations of singly Wattled Ibis couples nesting under the tree’s canopy (Cano, pers. obs.).  In all cases, the nest is a platform of branches, leaves, sticks and sometimes plastics and ropes (Cano, pers. obs.), lined with grass and strips of bark; sometimes at high and cold altitudes, they are located to the east for maximum exposure to morning sun. The Wattled Ibis normally lays two to three dirty white, rough shelled eggs. First-egg dates for 10 nests werein March (1), April (5), May (1), July (2), and December (1) (Ash and Atkins 2009).

Movements. This species is sedentary but may make local altitudinal movements within its range (del Hoyo et al. 1992). For instance, the species was recorded only during the dry season in a study on species composition and distribution in riverine and wetland habitats at Southern area of Lake Tana (Aynalem and Bekele 2008).

Diet/Feeding. Its diet is unknown (BirdLife 2016), but is most likely to consist of worms and insects (such as the adults and larvae of coprophagus beetles) 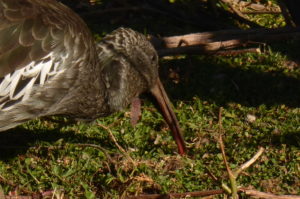 . According to Brown et al. (1982) and del Hoyo et al. (1992), frogs and small mammals (young mice) are part of the diet of the species as well. They are also known to follow herds of domestic animals, searching their dung for beetles and other insects (Cano, obs. pers.). At times Wattled Ibis share the feeding sites with Northern Bald Ibis[1] Geronticus eremita (Serra and Wondafrash 2009), Cattle Egrets Bubulcus ibis and Sacred Ibis Threskioris aethiopicus (Cano, obs. pers.). With their long downward curved beaks they probe the ground, searching for preys.

Range and population. Wattled Ibis is an endemic ibis species to Ethiopia and Eritrea. In Ethiopia it is mainly distributed in central areas between 35° and 40°E , resident below 15°N (Ash and Atkins 2009). It is a conspicuous and very common along its range distribution (Ash and Atkins 2009). Its population is unknown. Huges (2006) reported an estimation of number of wattled  ibis Bale Mountains National Park, with at least 246 ibises recorded in 27 km.

Habitat. They may occur all over Ethiopian highlands at altitudes ranging from 1500 m (5000 feet) to the highest moorlands at 4100 m (13451.44 feet), avoiding lowlands areas. It prefers meadows and highland river courses with rocky cliffs (where it roosts and breeds), and open country such as alpine moorland, swamps, cultivated land, plantations, mixed forests and open woodland (typically olive tree Olea spp. and juniper Juniperus procera, Podocarpus falcatus and occasionally Eucalyptus spp.) (del Hoyo et al.1992, Cano pers. obs.). It has also become well adapted to anthropic landscapes and conditions; lonely individuals or small flocks of Ibises can often be seen in different cities and small district towns along the uplands, for example:  Jima, Adama, Awassa, Gondar, Bahir Dar, Nekempte or Addis Ababa (Cano, pers. obs.). The Wattled Ibis is a gregarious species; Huges (2006) reported groups of 22-93 at 5 places in Bale Mountains National Park. borders. Ash and Atkins (2009) recorded in pairs (32% of 59 counts), then in parties of 3–10 and 12–60 birds (24% each), singly in 19%, and once 150 birds together.

Threats. The species is exposing at high risk to chemical used in the agriculture (Welegerima et al. 2014). According to Huges (2006) in the Bale Mountains, overgrazing and tree-cutting is a threat, and is also potentially threatened by soil erosion, conversion to agriculture and extraction of groundwater.

Conservation. Conservation measures proposed include controlling extraction of groundwater and use of chemical in the agriculture.

Aynalem, S. and Bekele, A. 2008. Species composition, relative abundance and distribution of bird fauna of riverine and wetland habitats of Infranz and Yiganda at southern tip of Lake Tana, Ethiopia. Tropical Ecology 49(2): 199-209.

[1] Unlikely this may happen currently