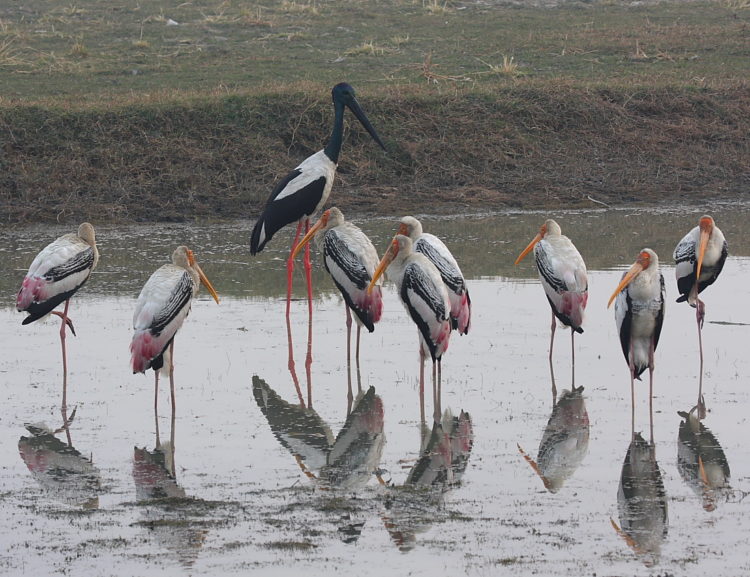 Research and robust data on waterbird status and requirements are biased to few locations in the world. South Asia is one of the locations with an impressive diversity of large waterbirds, but with sparse information on species and their habitats to inform conservation planning.

Many assumptions from south Asia drive species assessments. A prominent assumption is that land use here is largely modified for agriculture and is therefore unable to sustain good populations of waterbirds. Preliminary work in a couple of locations has found this assumption to be incorrect for several species that include Storks, Ibis and Spoonbills. An example was the recent discovery of one of the largest known breeding populations of Lesser Adjutants in the agricultural landscape of lowland Nepal. Monsoonal rice cropping here, and in some locations of Uttar Pradesh in India, appear to be conducive for the persistence and excellent breeding of several waterbird species such as the Black-necked Stork and Asian Openbill.

A key question now is whether other rice-dominated landscapes in south Asia are similarly valuable for large waterbirds. Answering this question, with a robust evaluation of factors that permit the coexistence of high-intensity farming and waterbird populations, is of great conservation value.

SIS-SG Co-chair Gopi Sundar is setting out to ask precisely this question as part of a collaborative program of the International Crane Foundation and the Nature Conservation Foundation. We are delighted to announce that he has received support via grants from the Eppley Foundation for Research and the National Geographic Committee for Research and Exploration towards his important goal.

The project aims to develop a sound understanding of the current status of several SIS species, including the Black-headed Ibis, Glossy Ibis, Black-necked Stork, Asian Openbill, Lesser Adjutant, and the Woolly-necked Stork, in addition to the globally-Vulnerable Sarus Crane. The project will also develop the first such multi-scale assessment of the factors important for species persistence and breeding in agricultural landscapes of south Asia.