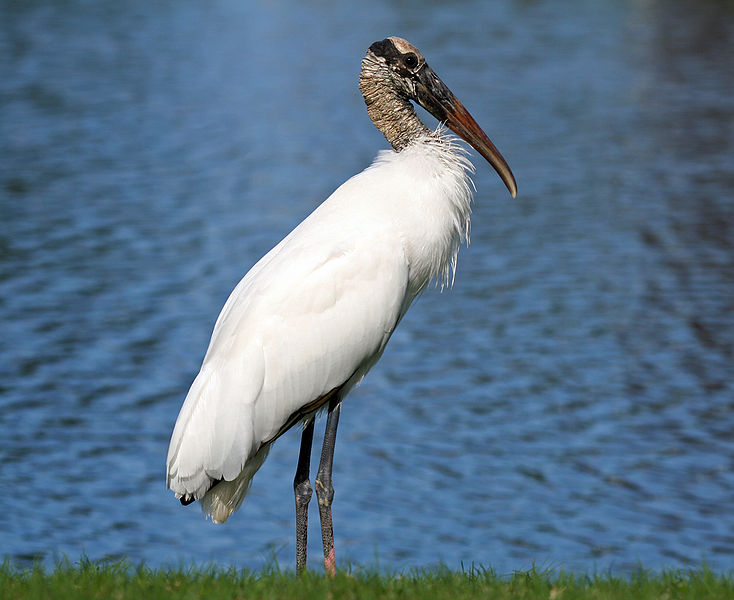 The wood stork (Mycteria americana) is a large American wading bird in the stork family Ciconiidae. It was formerly called the “wood ibis”, though it is not an ibis. As of June 26, 2014 it is classified as a threatened species by the U.S. Fish & Wildlife Service.[2][3] 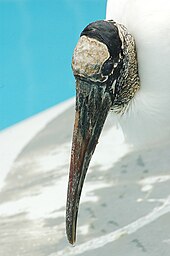 The wood stork’s head much resembles that of an ibis

This is a subtropical and tropical species which breeds in much of South America, Central America and the Caribbean. The wood stork is the only stork that presently breeds in North America. In the United States there is a small breeding population in Florida, Georgia, and South Carolina, along with a recently discovered rookery in southeastern North Carolina. After a successful three-decade conservation effort resulting in an increased population in the southeastern United States, the wood stork was removed from the endangered species list and upgraded to threatened on June 26, 2014.[3] Similarly, in the state of Santa Catarina, Brazil, its decline seems to have been reversed: after an absence between the late 1960s and the mid-1990s, the species is now again regularly encountered there, in particular in the Tubarão River region.[10] It is likely that the Paraná River region’s wetlands served as a stronghold of the species, from where it is now re-colonizing some of its former haunts.[11] Globally, it is considered a species of Least Concern by the IUCN due to its large range.[1]

The wood stork is a broad-winged soaring bird that flies with its neck outstretched and legs extended. It forages usually where lowering water levels concentrate fish in open wetlands; it also frequents paddy fields. Walking slowly and steadily in shallow water up to its belly, it seeks prey, which, like that of most of its relatives, consists of fish, frogs and large insects. It catches fish by holding its bill open in the water until a fish is detected.[12]

In the United States, the wood stork favors cypress trees in marshes, swamps, or (less often) among mangroves and nearby habitat.[13] 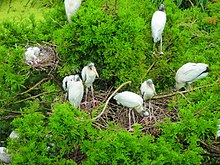 Nesting colony in Georgia, US

A resident breeder in lowland wetlands with trees, the wood stork builds a large stick nest in a forest tree. They nest colonially with up to twenty-five nests in one tree.[13] Breeding once a year, a female typically lays three to five eggs in the clutch. The eggs are incubated 27–32 days by both sexes. Wood storks’ reproductive cycle is triggered when waterholes dry up sufficiently to concentrate fish in sufficient numbers for efficient feeding of the chicks. Each chick weighs approximately 2 oz (57 g), is unable to fly and is helpless. Competition for food is fierce, and if food is scarce, only the older chicks will survive. Week-old chicks are fed about 15 times per day, and grow rapidly. By 14 days, each will weigh 10 times its hatching weight. At 28 days, each is 25 times heavier. During the breeding season, wood storks need over 400 lb (180 kg) of fish to feed themselves and their offspring. When the weather is very warm, parents also collect water and bring it to the nest to drool on and into the mouths of the chicks. By the time the young are four weeks old, both parents leave the nest to search for food, and this continues until the chicks fledge or leave the nest. Young may continue to return to the colony for another 10 to 15 days to roost or to try to get food from their parents. A colony is considered successful if its parents average at least 1.5 fledged young per nest.[14]

Each adult will defend its nest against various predators. Corvids, vultures, grackles and striped skunks will attempt to pick off eggs.[14] Raccoons are the leading predator of nests, and can cause almost complete colony nesting failure when water dries under nests in drought years since they can easily access the nest using dry ground under the tree.[15] Adults have few natural predators, but unwary ones have been picked off by American alligators.[16] 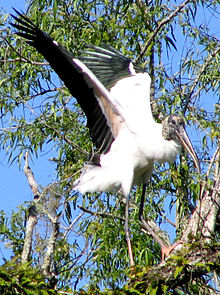 This species seems to have evolved in tropical regions; its North American presence probably postdates the last ice age. A fossil fragment from the Touro Passo Formation found at Arroio Touro Passo (Rio Grande do Sul, Brazil) might be of the living species; it is at most from the Late Pleistoceneage, a few 10,000s of years ago.[17] North American fossils from that time are of an extinct larger relative, M. wetmorei. This was probably a sister species; both occurred sympatrically on Cuba at the end of the Pleistocene.[18]