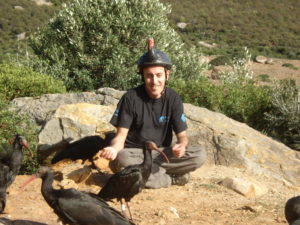 I obtained my PhD in 1989 on parent-offspring communicative interactions in magpies. Then I had two post doctoral fellowships at CSIC (1990-1991) and the Behavioural Ecology Group at the Department of Zoology of the University of Cambridge (UK) (1991-1992) on communicative interactions between brood-parasitic chicks and their hosts. At this time I began to collaborate with Francis S. Tortosa on white stork breeding and behavioural ecology.

I also participated as a consultant (animal behaviour) in the Northern Bald Ibis reintroduction project between 2007 and 2010 (Proyecto Eremita).