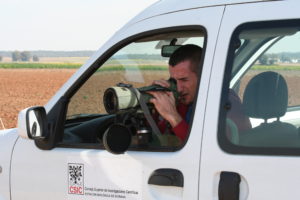 I am a post-doc researcher at the Universidad de Huelva (Spain). I obtained my PhD at the Estación Biológica de Doñana, CSIC in 2014 under the co-direction of Drs Jordi Figuerola and Andy Green. My thesis focused mainly on the population dynamics of a newly-established glossy ibis (Plegadis falcinellus) population that settled in Doñana marshes (S Spain) in 1996. This work revealed, among others, the central role played by high immigration rate and local drought events for the impressive population growth and its expansion towards new colonies in W Europe and Mediterranean Basin. Currently, I am working to set up, in close collaboration with the Estación Biológica de Doñana, Dr. Jocelyn Champagnon of the Tour du Valat (France) and the IUCN Stork, Ibis and Spoonbill Specialist Group, the first international network for the study of glossy ibis whose inaugural workshop we hope to hold in Seville in 2017. As a result of my interests in Population Ecology I have developed good skills in capture-recapture, matrix population, and hierarchical (N-mixture) models.