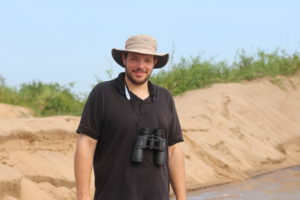 Michael Meyerhoff is a trained animal keeper with a special interest in waterbirds, who has spent the last years in different roles (presently as Project Manager) at the Angkor Centre for Conservation of Biodiversity (ACCB) in Cambodia, a conservation project established by Allwetterzoo Münster (Germany) and the Zoological Society for the Conservation of Species and Populations (ZGAP).

At ACCB, Michael is directly involved in the captive breeding programmes for the Lesser Adjutant and the Asian Woolly-necked Storks, as well as in animal rescues for above mentioned species.