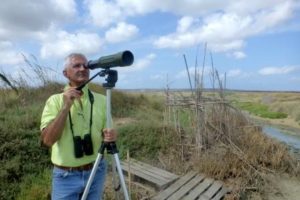 Marcello is the president of the Sardinian Ornithological Group and Editor of the ornithological magazine of Sardinia Aves Ichnusae.

He is an ornithologist consultant and birdwatching guide who works mainly in Sardinia, but he has traveled extensively around Europe and carried out various ornithological research in North Africa (Tunisia-Algeria-Morocco). He has published over 130 papers on peer-reviewed magazines about the avifauna of this area of ​​the Mediterranean, including the Checklist of the birds of Sardinia (1995-96 and 2001), long-term studies on the distribution and dynamics of the populations of the breeding birds in the island (1995-96 and 2017). Marcello is also the coordinator for Sardinia of the Atlas of Breeding Birds and of the Wintering Birds in Italy (2010-2014) and has collaborated in the compilation of some national and european Action Plans.

His ornithological interests focus on the whole avifauna of Sardinia and the central Mediterranean, about waterbirds. He has found the first nests of Glossy Ibis in Sardinia and published several researches on the status of Black stork, White stork and Glossy ibis in the island. In the last 30 year she has been coordinating the surveys of heronries of his native island of Sardinia and also helped in several national and local conservation projects with the Italian delegations of WWF and BirdLife International.

Marcello’s most relevant publications can be downloaded from the following links: