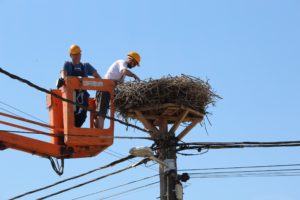 I was born on 18 October, 1987 in Zagreb, Croatia. After finishing elementary school, I decided to continue my education at a Vet school. Next educational step was Biology department of the Faculty of Science in Zagreb.  On the first year of my study I became part of Ornithological group, as Association of biology students – BIUS member, and birds are still my favorite group of animals, although I’m interested in different groups of fauna and flora. After completing Bachelor’s Degree on the topic of Ecological Importance of Wetlands, I enrolled in MSc programme “Ecology of freshwater ecosystems”. I continued my work at BIUS and started organizing small projects, most of which were aiming to educate my colleagues about birds. The first bigger project I have led, and I’m still very proud of it, was „Researching biodiversity of Zrmanja river 2010“, a project which gathered more than 100 field workers from 5 different countries. After graduating, I volunteered for a few weeks at the BIOM Association (Croatian BirdLife), but then the first job offer came and it was from the State Institute for Nature Protection (SINP). I was offered to work as an expert associate for vertebrates and I accepted it because it meant working on organization of bird monitoring. Approximately at the same time I got a bird ringing license and started to be more active in that field, especially regarding gulls and white storks. In 2014 SINP decided to launch pilot project Common Bird Monitoring in Croatia and from 2014 to 2016 I was the national coordinator for that monitoring, together with my boss, Vlatka Dumbović Mazal. From the end of 2015, I have been working intensively with young ornithologists from Association of biology students – BIUS as their mentor. 2017 brought changes because I started working at Public county institution for managing protected areas and other protected parts of nature in Zagreb County “Green Ring” as an expert associate. Green Ring puts a lot of effort in promotion and conservation of storks, and together with them, during the last five years, I’ve been intensively involved in white stork monitoring, and also white stork chicks ringing. I’ve ringed more than 800 stork chicks and I plan to continue this work but also to start working with black storks more intensively.