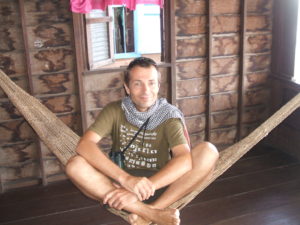 Frédéric Goes is a conservationist and ornithologist now based in Corsica, France. From 1998 to 2006, he conducted pioneer survey and conservation work in Cambodia and trained the new generation of local ornithologists. He worked mainly for the Wildlife Conservation Society and initiated the protection of the globally significant large waterbirds colonies of the Tonle Sap lake, gaining in depth insight into the breeding ecology of a series of storks and ibis species. This conservation programme was highly successful, allowing dramatic recovery of seven globally threatened or near-threatened species. He is the founding editor of the Cambodia Bird News periodical while authoring numerous reports, papers and book contributions. After leaving Cambodia, he worked on a major synthesis on the country’s avifauna, publishing The Birds of Cambodia – An Annotated Checklist in 2014. Aside biodiversity projects and nature guiding in Corsica, he keeps a strong interest in bird conservation and status in Cambodia, where he regularly travels for missions and field projects.