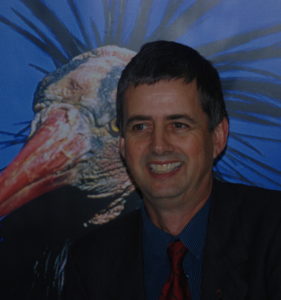 Chris Bowden is Globally Threatened Species Officer for the Royal Society for the Protection of Birds (RSPB), and has worked on Northern Bald Ibis since 1994 and was based in Agadir, Morocco for a total of seven years working on that species.

Since 2004, his primary role has been coordinating the Asian Vulture Programme in South Asia. He is currently Programme Manager for SAVE (Saving Asia’s Vultures from Extinction), a consortium of regional and international organisations committed to the conservation of vultures in South Asia. Chris is also the Co-Chair of the IUCN Vulture Specialist Group (VSG) since its formation in 2011.

His experience over the past 30 years is mainly with Critically Endangered bird species, being field-based in Africa, Asia, UK and the Caribbean, (early on, breeding ecology work was mainly on Woodlark, Nightjar, Stone Curlew in the UK)  both as a research ecologist but mainly as a coordinator in recent years.

Chris is currently based in Bangalore, India with regular UK visits to RSPB.