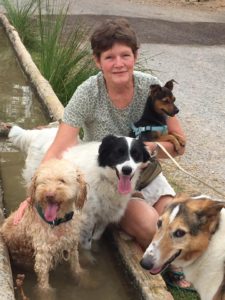 Cathy’s interest in SIS dates back to her first job after receiving her BSc degree in Wildlife Biology in 1980, when she worked as a zoo keeper at San Antonio Zoo in the USA, where a large and unusual collection of SIS was held. Her MSc. thesis was on an ethological comparison of three species of Ciconia: the white stork Ciconia ciconia, the Maguari stork Ciconia maguari and the Oriental white stork  Ciconia boyciana, with the objective of determining whether the Oriental white stork was behaviorally different enough from similar storks to be considered a separate species.  Cathy has served as Chair for the European Association of Zoos and Aquariums (EAZA) Ciconiiformes and Phoenicopteriformes Taxon Advisory Group (TAG) since 1992. The TAG focuses on improved husbandry, cooperative management, research and conservation of species under its umbrella in European zoos, but also in cooperation with other regions.  An important function of the group is to serve as a link between in situ and ex situ workers. Additionally Cathy is the European studbook keeper for Marabou Storks Leptoptilos crumeniferus and the wreathed hornbills Rhyticeros undulatus and Papuan hornbill R. plicatus, as well as the EEP Coordinator for the Oriental white stork. She also serves as a member of some other taxon-based TAGs and EEP committees. Cathy is the European Ex Situ Coordinator for the IUCN-SSC/Wetlands International  Flamingo Specialist Group, the chair of the IUCN-SSC/Wetlands International  Heron Specialist Group Ex situ Conservation Breeding and Management Working Group, a member of the White-bellied Heron Working Group and  co-chair at the International Advisory Group for the Northern Bald Ibis (IAGNBI). Email addresses:  ckingmore@outlook.com, cathy.king@weltvogelpark.de