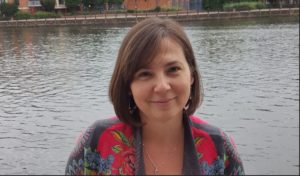 Having always been interested in birds, conservation and animal welfare, Andrea completed her Masters in biology (specialization ecology) at the University of Zagreb (Croatia).  Her main focus is on migratory birds but urban biodiversity has also been her passion for a long time, and she was able to combine these two interests by researching migratory birds in the city of Samobor, Croatia for her diploma thesis. As coordinator of a project studying migration behaviour of White Storks Ciconia ciconia using satellite tracking,  developed in cooperation with NGO Stork Switzerland and Nature Park Lonjsko Polje, she continues working on migratory birds. Urban biodiversity projects include bird protection from window collision monitoring and prevention, and monitoring urban populations of Grey Herons Ardea cinerea and Hooded Crows Corvus cornix.

Andrea has been working as zoological director of Zagreb zoo, Croatia since 2008. As a committed advocate for welfare of birds kept in captivity, she developed the Aviary Database (http://aviarydatabase.com/), an information-sharing resource and a tool for exchanging knowledge and experiences in designing and constructing aviaries.

Andrea has been serving a Vice-chair of Ciconiiformes and Phoenicopteriformes Taxon Advisory Group (TAG) for the European Association of Zoos and Aquaria (EAZA) since 2010. In that capacity, she works on creation of ex situ and in situ conservation links, and participates in and supports relevant research projects. She works on improving the management of Ciconiiformes and Phoenicopteriformes species within EAZA institutions by promoting high levels of captive welfare and husbandry. As the EAZA Specified monitor for Glossy Ibis Plegadis falcinellus she strives to ensure that the captive population remains healthy and self-sustaining, as well as capable of being an effective tool in support of conservation of the Glossy Ibises in the wild.

Raptors are another group of birds she is actively involved in, particularly Griffon Vultures Gyps fulvus. Andrea contributes to the conservation of the Griffon Vultures by providing valuable expertise, training and support for the Beli Rescue Centre for Griffon Vultures on island of Cres, only registered griffon vulture rescue centre in the Republic of Croatia.