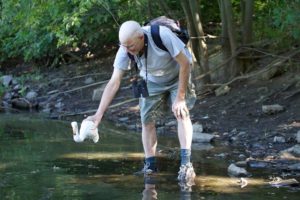 David’s passion for ibises began in an east Texas swamp, where he studied the nesting biology and guano output of American White Ibises (Eudocimus albus) and other colonial waterbirds as an undergraduate at Stephen F. Austin State University in Nacogdoches. From east Texas, David travelled to South Africa to study the country’s four species of ibises — with an emphasis on their behaviour and ecology — under the auspices of the Percy FitzPatrick Institute of African Ornithology. David’s research on nesting and habitat use by the Southern Bald Ibis (Geronticus calvus; VU), focusing on the bird’s relationship with grassfires, and the role of pre-Anthropocene fire in shaping South Africa’s biomes, earned him a Master’s degree in Zoology from the University of Cape Town. David has also studied and published his work on the White-faced Ibis (Plegadis chihi) in North America, primates in China, and colonial folklore in southern Mexico. After a rewarding career in education working with at-risk youth, David now enjoys the bucolic life of a flower grower in the Netherlands.